“Welcome to Thermophiles in Love, the five-gender dating game for microorganisms!  Learn your true thermophile gender and find your “special three someones” in a microscopic world where everyone longs to be come part of to the perfect quadrouple.”

Thermophiles in Love, the Larp

Thermophiles in Love (2016) is a multimedia collaboration between Samara Hayley Steele, Mark Marino, Rob Wittig, and Cathy Podezwa exploring gender and the ties that bind.  The larpscript was written by Samara Hayley Steele, and a netprov by same name was run by the four collaborators from October 21st – November 6th, 2016.  The netprov was produce by Meanwhile Netprov Studio.

A beta-version of the larp was run at the Berkeley Center for New Media at UC Berkeley on October 14th, 2016.  The first two official runs occurred as part of the gallery exhibit at the 30th Annual Meeting of the Society for Literature, Science, and the Arts (SLSA) in Atlanta, GA, November 3rd-6th, 2016.  The larp has also been run in a number of other settings, including the 2018 Living Games Conference in Boston.

A screenshot of the Genderator, a digital gender assignment tool created by Mark Marino. 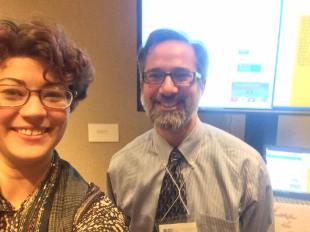 Hayley and Mark fire up the Genderator at the 2016 SLSA conference gallery. The Thermophiles in Love larp at the SLSA.

The Thermophiles in Love Netprov live at the 2016 SLSA. Below you will find the latest version of the Thermophiles in Love larpscript and player handout.  TiL is a work in progress, evolving with each run of the game.

If you run the larp, let us know at thermophilesinlove@gmail.com.  We’d love to hear your feedback!

This piece has been featured at:

Designed by Mark Marino, The Genderator assigns thermophile genders to players through a simple mechanism.  The genders are Acido, Hype, Fac, Meso, and Obli.

Samara Hayley Steele designed the initial gender schema for Thermophiles in Love based on research into 5-gendered and non-binary societies worldwide, while also incorporating her theory of gender playability in game design.  Collaborators Rob Wittig, Mark Marino, and Cathy Podeswa worked to distill the gender descriptions, adding their own voices and touches of humor.

The gender descriptions were inspired by Barnum Statements: general enough to apply to almost anyone, but specific enough to evoke a sense of personal identification with one’s game gender.

Are you ready to learn your true thermophile gender? Click the link to visit the Official Thermophiles in Love Genderator:

“Game Design Methodologies for Gender Playability: A Case Study of Thermophiles in Love,” presented by Samara Hayley Steele as part of the Social Studies of Live Action Role-Playing Games at the European University at St. Petersburg, December 8th-9th, 2016.

A beta-version of the Thermophiles in Love larp was also run as part of the presentation Lessons in Netprov: Collaborative Writing in the Digital Age by Rob Wittig, Mark Marino, and Samara Hayley Steele at the Berkeley Center for New Media at UC Berkeley on October 14th, 2016.

A standalone Thermophiles in Love netprov ran from October 30th-November 6th, 2016 and was produced by Meanwhile Netprov Studio.

The netprov took the form of a 5-gender dating website, as well as discussion boards for thermophiles to work through relationship issues.

A discussion board featured in the Thermophiles in Love netprov