Steele has presented their scholarship critically exploring gender, race, political economy, games, code, and data at numerous academic gatherings and events including invited presentations at Lewis & Clark College, UC Berkeley, and the European University at St. Petersburg. Her work on what she calls “anti-code” has been cited in Mark Marino’s book, Critical Code Studies (The MIT Press, 2020). She was a 2018-2020 HASTAC Scholars Fellow, a 2020 Mellon Public Scholar, and she been an Advanced Research Affiliate of the HaCCS (Humanities and Critical Code Studies) Working Group since 2016. They have been an analog games scholar since 2014, and their paper The Reality Code: Interpreting Aggregate Larp Rules as Code that Runs on Humans was printed by the International Journal of Roleplaying (IJRP) in 2016. She served as a Mellon Public Scholar in 2020, and during her MFA, she served as a graduate assistance with the Portland Center for Public Humanities. Presently, they are working with members of their dissertation committee towards the launch of a new interdisciplinary field called Consent Studies. A full list of their presentations, papers, and academic service may be found on their CV.

Steele on a panel discussing community management at the 2016 Living Games Conference.

Steele presenting her research at the 2018 Role-Play and Simulation in Education Conference at Northeastern University in Boston. 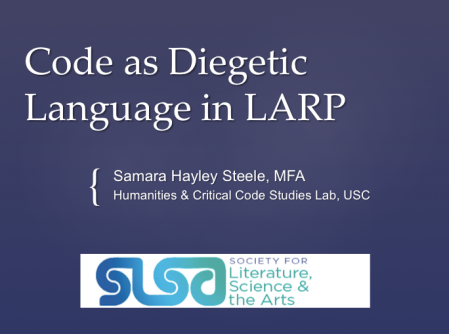 A slide from Steele’s talk at the SLSA Conference in Atlanta in 2016.

Steele on a panel at the 2016 Living Games Conference.
Loading Comments...